Private dining rooms available to hire for events in Bankside

Bankside sits on the southern shoreline of the Thames between Blackfriars Bridge and London Bridge with the neighbouring South London districts of Waterloo to the west, Southwark to the east and Elephant and Castle on its southern edge.

This historic riverside area has an interesting mix of hotels and restaurants with private dining rooms and riverside traditional London pubs with function rooms catering for group dining events and drinks parties.

Bankside is home to a number of impressive modern corporate offices which sit alongside the tourist magnets of Shakespeare’s Globe and Tate Modern as well as the London foodie mecca of Borough Market.

Visitors travelling on foot to Bankside from the City of London can reach the area by walking across the pedestrian Millennium Bridge from the St. Paul’s district of The City which provides spectacular views of both St. Paul’s Cathedral and Tate Modern, to which it is connected. 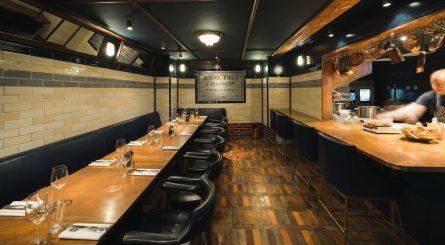 Hawksmoor Borough
British Steakhouse |
Seats up to 22 |
£85+ per person

The Cook’s Room at Hawksmoor Borough – just a stone’s throw from Borough Market & London Bridge – seats up to 18 private dining guests at the main dining table. An additional four kitchen-counter seats can be used to increase capacity to 22 guests.