The West London district of Hammersmith is bordered by Fulham to the south and Shepherd’s Bush to the north with Kensington and Chiswick respectively located to its eastern and western edges. The district is connected to South West London via Hammersmith Bridge which crosses the Thames to Barnes on the river’s southern shoreline.

Hammersmith has a decent selection of historic traditional London pubs with private function rooms and restaurants with private dining rooms including the Michelin starred River Cafe restaurant, located close to the Thames Path.

The area is home to the famous Hammersmith Apollo music venue which has staged concerts by some of the most legendary musical acts in the world including The Beatles. For shoppers, a great choice of major high street brands and outlets are to be found in the busy shopping centres at Broadway and Kings Mall in the centre of the district.

Hammersmith is easily reached by road and London Underground. The main A4 Great West Road runs through the district, providing quick connection to Heathrow Airport via the M4 motorway which starts at nearby Chiswick. The district has two tube stations – both rather confusingly called Hammersmith – one of which – on Beadon Road – is reached via Circle and Hammersmith & City lines and the other – located on Grove Road – is on the Piccadilly and District lines. 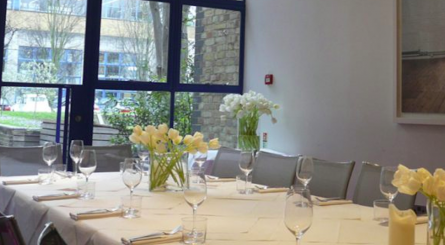 The private dining room at the legendary River Cafe in Hammersmith can accommodate between 10 – 18 seated guests.