Chiswick in West London is a wealthy residential district situated between Brentford to the east with Hammersmith and Shepherd’s Bush on its eastern perimeter. The area is bordered by Acton to the north with the River Thames at its southern edge.

A good selection of restaurants, wine bars and traditional London pubs are to be found in the streets around Chiswick High Street & the large open space of Turnham Green in the centre of the district, many of which have private dining and function rooms available to hire for group dining events including celebration lunches & dinners.

Chiswick is one of those London districts with a real ‘urban village’ feel to it which is complemented by the welcoming pubs dotted along the area’s riverside walkway which overlooks the equally desirable district of Barnes on the southern shoreline of the Thames and provides stunning views of nearby Hammersmith Bridge.

Chiswick has excellent road connections from areas to the west of the capital including Heathrow Airport due to the fact that the major M4 motorway – connecting London to Bristol as well as Cardiff in Wales – starts at Chiswick Roundabout which also links to Central London via the Great West Road.

Home to Fullers, one of London’s oldest breweries, Chiswick’s affluence ensures that venues in the district with private rooms are always in high demand for group dining and standing drinks reception events. 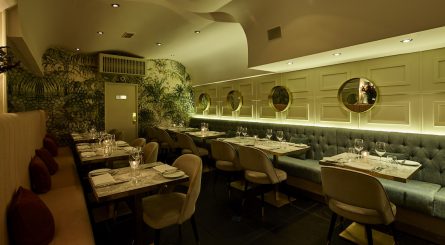 Restaurant Michael Nadra in Chiswick has developed an enviable reputation for its exceptional cuisine since 2005. Restaurant exclusive hire available for private dining events of up to 48 seated guests. 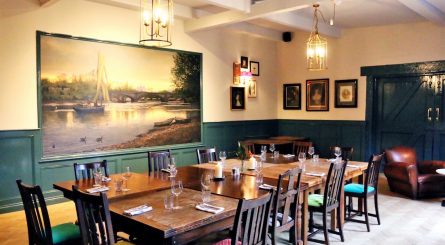 The Garden Room at The Pilot in Chiswick can accommodate up to 40 seated guests for dining events or up to 80 for standing receptions.