Farringdon in London EC1, is located between Clerkenwell and Islington to the north and the St. Paul’s area of the City of London to the south. This charming district of historic back streets and elegant squares is separated from The Barbican area of The City by its Aldersgate Street eastern boundary with the nearby jewellery quarter of Hatton Garden, just a few minutes walk from Farringdon Road, located on its western edge.

The district has massively gained in popularity in recent years and is now home to a number of international businesses which has proved a great boon to restaurants in Farringdon with private dining rooms available for group dining events such as corporate breakfasts, lunches and dinners.

This unique part of London is positively dripping in history with Smithfield Market, a Victorian Grade II listed meat market, and St. Bartholomew’s Hospital, known as Bart’s and the oldest hospital in the United Kingdom, to be found in the southern Smithfield part of the district which is also home to Fabric, one of the most famous nightclubs in the world.

The Crossrail railway project includes Farringdon station as part of its transport connection of the east and west of London which only serves to increase the area’s desirability as a location for business and demand for venues providing private spaces for corporate group dining events.

Farringdon is a 10 – 15 minute taxi ride from The City of London and easily accessible by London Underground via Farringdon & Barbican tube stations on the Metropolitan, Circle & Hammersmith & City lines.

Situated just a three minute walk from Farringdon Station and ideally placed between The City and the West End, the private dining rooms at Bleeding Heart can accommodate 16 – 124 seated guests or 20 – 200 guests for standing receptions. 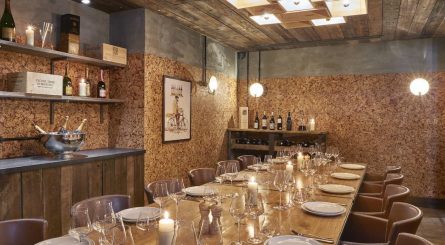 The cork walled private dining room at Humble Grape in St. Bride’s Passage, just off Fleet Street, is located in the crypt and seats up to 16 guests. 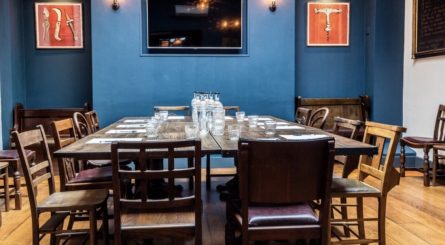 The Fox & Anchor, close to Smithfield Market, has private dining rooms able to seat 30 – 50 guests which are also available to hire for standing receptions of 40 – 80 guests.