Uber swanky Hampstead is situated in North West London, bordered by neighbouring Highgate to the east, with Belsize Park and Primrose Hill to the south. Traditionally home to London’s liberal and artistic set and with an eponymously named Heath providing splendid views over London, Hampstead is reached by tube to Hampstead underground station. 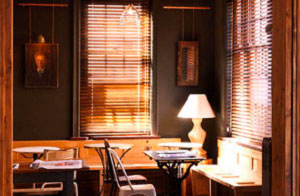 The private dining room at The Old White Bear in Hampstead can accomodate up to 14 seated diners.