The self-proclaimed friendliest city on earth and the home of acclaimed architect Charles Rennie Mackintosh, Glasgow also boasts a head-swimming array of attractions.  These include fabulous Victorian architectural heritage such as City Chambers to modern areas of regeneration, a rich dining culture and nightlife, and an impressive mix of museums and galleries like Kelvingrove Art Gallery and a legendary and vibrant music scene – it’s a designated UNESCO City of Music.

As one of Scotland’s major cities, it’s also a hub for business and entertaining, attracting two million tourists and a staggering 20 million day visits each year. The city also offers over 90 parks, while within short travelling distances of the city centre are areas of outstanding natural beauty such as Loch Lomond and the National Park. It’s well served by an airport, trains, fabulous hotels and restaurants and a multitude of great conference facilities for all manner of private dining and events – whether in the modern purpose-built centres, hotels or historical estates. 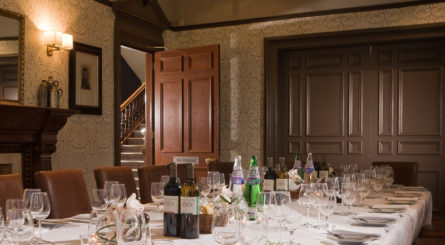 The three private dining rooms at Glasgow’s Hotel du Vin & Bistro can seat between 10 and 80 guests. 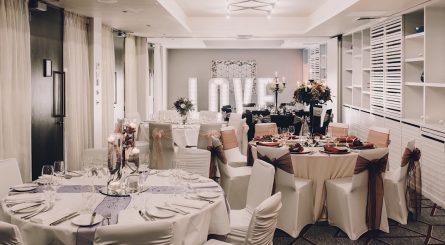 Glasgow’s Malmaison has two private dining rooms able to seat up to 10 diners.

Help me choose a venue
Nearby locations