Best private dining rooms in and around Shaftesbury Avenue

Shaftesbury Avenue is a major thoroughfare in London’s West End which runs from New Oxford Street, close to Fitzrovia, in a southerly direction to Piccadilly Circus, crossing Charing Cross Road around its half-way point at Cambridge Circus.

This busy West End street, which essentially bisects Soho on its western side with Covent Garden on its east, runs through the heart of London’s Theatreland with the many famous theatres that are actually located on Shaftesbury Avenue including The Shaftesbury, The Lyric and The Apollo.

The street’s close proximity to three major West End districts, each of which being home to a multitude of private restaurant dining rooms and pub function rooms, makes it an important street for access to venues with spaces for group dining events and standing drinks receptions. 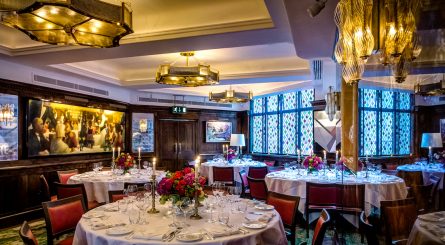 The private dining room at Covent Garden’s legendary The Ivy can accommodate up to 32 guests at one oval table or up to 60 seated guests with 10 guests per round table or up to 100 guests for standing drinks receptions.

Help me choose an Xmas venue
Nearby locations
Soho »