The Don Restaurant and Bistro

Private Hire is available on weekends.

Private Dining in The City of London

The Don Restaurant and Bistro, midway between The Bank of England and Cannon Street Station in the very heart of The City of London, provides an unrivalled combination of history and modernity, plus some of the City’s best food and wine and service.

In 1342 the premises were purchased by The Worshipful Company of Drapers to use as their Livery Hall.

In 1798, the young Scottish entrepreneur George Sandeman took them as the headquarters for his newly established Sandeman Port and Sherry Company. For almost 200 years Sandeman shipped their barrels of fortified wine from Oporto and Jerez to blend and bottle them in the cellars below St Swithins Lane.

In 2000, the premises were converted by Robert and Robyn Wilson, owners of The Bleeding Heart Restaurant, to become its City sibling, The Don Restaurant and Bistro, with George Sandeman supplying many of the Ports on the award-winning wine list.

Downstairs, the atmospheric Bistro and bar and Sandeman private dining room are on the site of the original blending room where the eponymous ports and sherries began life all those years ago.

The Don Restaurant and Bistro has been listed in these categories 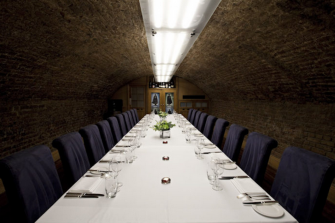 Private Dining in St Swithins Lane, London Places like the Don are what make the City of London so special and never more so than right now. The regeneration of